Change comes slowly within the Church–but it comes–and, on August 1, 2018, the Vatican announced that the section of the Catechism stating the Church’s understanding of the morality of the Death Penalty (#2267) has been changed.
Why has the Church modified a stance it has held for over a millennium? I believe that this
evolution is the result of the Church’s relentless search for Wisdom and Truth.
Wisdom is to “…see with God’s eyes, to feel with God’s heart, to speak with God’s words…”
Wisdom is knowing the Truth.
Truth never changes -but our understanding of truth grows over time. As individuals, our understanding of truth grows throughout our lives as we mature and are influenced by our education and experiences. Similarly, the understanding of Truth in the life of the Church has developed by the inspiration of the Holy Spirit, but also by the influences of its historical experiences and by the progress of human arts and sciences. The Church’s understanding of Truth is described in the Catechism of the Catholic Church (CCC), which must be amended as our understanding of Truth and Wisdom evolves. The revision reflects an authentic development of the Church’s doctrine that started with St.
John Paul II and has continued under his successors. The Catechism now says the death
penalty is “inadmissible”- it should not be used -because it violates the dignity of the person and because “more effective systems of detention have been developed, which ensure the due protection of citizens but, at the same time, do not definitively deprive the guilty of the possibility of redemption.”
The Church does not intend by this revision to minimize the harm done to the victims and
survivors of grave crimes. Those who have committed such offenses must be held
responsible by society and will certainly be held accountable by God for their actions. Nor is the Catechism equating capital punishment with the evils of abortion and euthanasia. Those crimes involve the direct killing of innocent life and they are always gravely immoral. By definition, the lives of almost all those on death row are not “innocent.” But as St. John Paul II said: “Not even a murderer loses his personal dignity, and God himself pledges to guarantee this.”
I respect that many good people will continue to believe that our society needs the death
penalty to express its moral outrage and to punish those who commit the ultimate crime of
taking human life. But I do not believe that public executions serve to advance that message in our secular society. I invite anyone who would like to discuss the issue, or how my opinion has also evolved over time, to call me. In all things, let us strive, as Paul suggested, “to understand the will of the Lord.” In that striving is true wisdom. 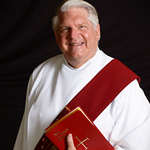